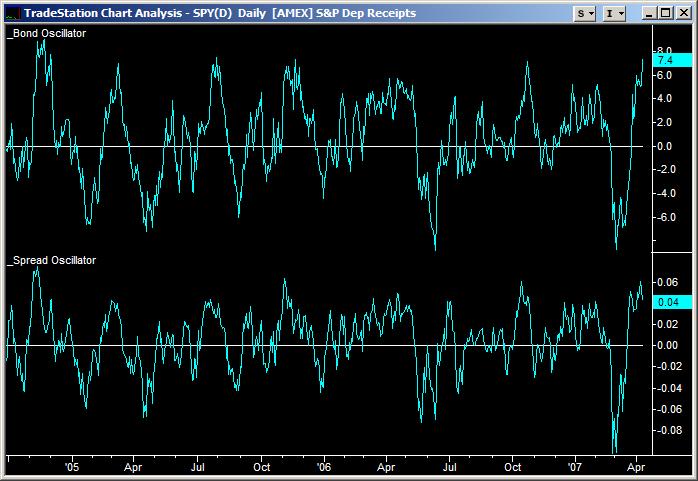 Intermarket analysis is a powerful tool that a trader can use to get an edge on the market. This type of analysis can be thought of as a type of instantaneous, fundamental analysis, which if done correctly, is a form of arbitrage. In this series of articles, we will show how and why intermarket analysis is predictive. It has a long history, having been used by traders since the 60s, but it became popular when John Murphy published his first intermarket analysis book entitled “Intermarket Technical Analysis Trading Strategies for the Global Stock, Bond, Commodity, and Currency Markets”.

Basic Premises of Intermarket Work
In this series of articles, I will be using a general framework outline. This will help illustrate the direction in which we’ll be going. I will then outline the specific relationships that will be the focus of these articles. There are an infinite number of relationships that exist between markets, but our discussions will be limited to those that I have found most useful and that I believe carry the most significance. After completion of the overview, we will begin our study of intermarket analysis using the events of 1987 as a case study of these types of relationships.

These premises form the basis of intermarket analysis. If it can be shown that all markets – financial ones, non-financial ones, domestic markets, global markets, and so on – are interrelated, and that each one of these components is simply a part of a greater whole, then it becomes clear that focusing one’s attention on only one market leaves a great possibility of missing vital directional clues. Indeed, understanding the sum of the markets is the key to understanding each part of the market. Market analysis, when limited to one market only, often leaves the analyst in doubt. Technical analysis can tell an important story about a common stock or a futures contract.

However, these technical readings are uncertain and can generate false positive signals. Understanding the relationship between multiple markets is truly what can provide critical information as to market direction. When in doubt, look to related markets for clues! Stated another way, the secret is to demonstrate that intermarket relationships exist, why they exist, and how they can be incorporated into our technical work to predict future price moments. Our goal is to show how these interrelationships can be thought of as fundamental and really a form of statistical arbitrage.


Intermarket Analysis as Context Clues
Intermarket analysis provides contextual clues about the market we are trading. When we only use technical analytic techniques on a market (think indicators such as RSI, MACD, etc.), we only have that information to use for our trading decisions. The idea of intermarket work is to go beyond this level and judge the market context for this technical analysis.

Concepts are sometimes best illustrated by example. Suppose your research shows that two markets usually trend in opposite directions, such as Treasury bonds and the Commodity Research Bureau Index or Silver. Suppose further that a separate analysis of the top markets provides a bullish outlook for both at the same time. Since those are two conclusions, arrived at through separate analysis techniques, the analyst might wish to go back and re-examine the individual conclusions. Intermarket analysis helps us avoid what might seemingly be good technical analyses on paper, by providing a broader picture of the markets. As we will see later, this will be key to forecasting future trends.

Indeed, there will be times when the usual intermarket relationships aren’t visible or simply are temporarily out of line. How do we resolve these potential conflicts? That is, how do we resolve when intermarket analysis does not match up with technical analysis? There are times when strong trends or true fundamentals in markets exist and these will override the influence of intermarket correlations.

Coming back to our previous example, getting bullish readings for two markets that normally don’t trend together is a sign that one of the markets is giving false readings. Our goal then in intermarket analysis is to find markets which lead the market we are trading. In addition, we need to understand when these relationships temporarily stop working due to strong trends or fundamental analysis.

By doing intermarket analysis, a trader nets two things. First is a warning signal at market turning points and also instantaneous fundamental analysis. Many intermarket relationships are predictive because they are fundamentally linked. One such example is crude oil and oil exploration stocks. Thinking about it logically, if oil exploration stock earnings are expected to outperform, then these stocks will be bullish because oil prices are expected to be higher. In turn, this is bullish for crude oil futures.

In this series of articles, my goal is to show that in general there are predictive intermarket relationships, and also discuss when these might fail. Finally, I’ll be concluding by explaining when intermarket analysis is not reliable because other controlling factors are overpowering.

The Role of the Business Cycle
Understanding the economic rationale that binds commodities, bonds, and the stock market requires some discussion of the business cycle and what happens during periods of expansion and recession. For example, the bond market is considered an excellent leading indicator of the U.S. economy. A rising bond market comes before economic strength. A weak bond market usually provides a leading indication of an economic downturn (although the lead times can be quite long). The stock market benefits from economic expansion and weakens during times of economic recession.

Both bonds and stocks are considered leading indicators of the economy. They usually turn down prior to a recession and bottom out after the economy is well into a recession. However, turns in the bond market usually occur first. Going back through the last 80 years, every major downturn in the stock market has either come after or at the same time as a major downturn in the bond market. During the last six recessions bonds have bottomed out an average of almost four months prior to bottoms in the stock market. During the postwar era stocks have begun to turn down an average of six months prior to the onset of a recession and have begun to turn up about six months prior to the end of a recession.

Tops in the bond market, which usually give earlier warnings of an impending recession, are generally associated with rising commodity markets. Conversely, during a recession falling commodity markets are usually associated with a bottom in the bond market. Therefore, movements in the commodity markets also play an important role in the analysis of bonds and stocks. I made the point about the relationship between bonds and stocks since world war two because all of these tops in bonds were caused by inflation. The problem is when disinflationary forces cause these issues then bonds do not top when the stock market turns down.

Focusing on the Dollar
Discussions so far have turned on the how the commodity markets affect the bond market and how the bond market affects stocks. The activity in the U.S. dollar plays an important role in the intermarket picture as well. Most market participants would agree with the general statement that a rising dollar is bullish for bonds and stocks and that a falling dollar is bearish for bonds and stocks. However, it’s not as simple as that. The U.S. dollar hit a major top in 1985 and dropped all the way to January 1988. For a large part of that time, bonds and stocks rose as the dollar weakened. Clearly, there must be something missing in this analysis.

Intermarket Analysis in Action
John Murphy’s books used chart analysis to show the case for intermarket relationships. John used the crash of 1987 to show how all the markets truly are interrelated. This is where my research on intermarket analysis began in 1992. Let’s focus now on some of that 1987 crash analysis. 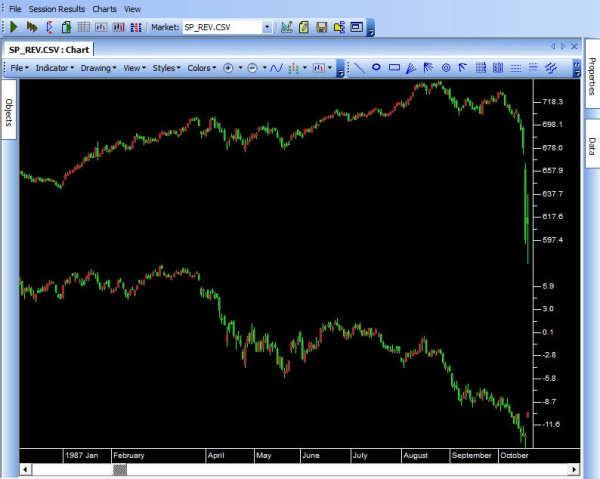 Some of that 1987 crash analysis

We first begin by looking at the correlation of the 30 year Treasury bonds to the S&P500. We can see bonds peaked in February 1987 (the chart on the bottom) and the market peaked in August of 1987 (the top chart). The sell-off in bonds foreshadowed the crash by about six months. 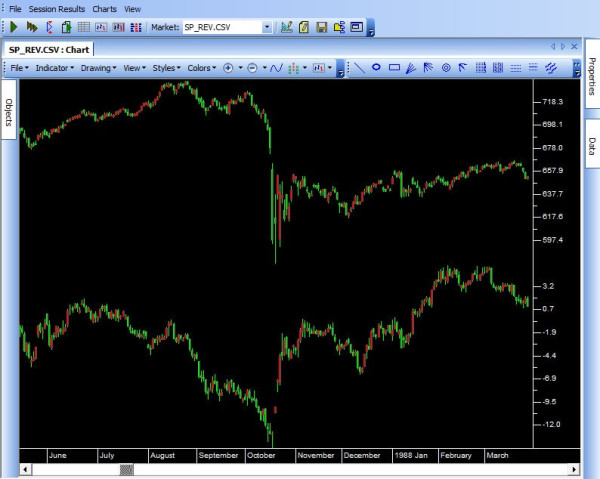 Looking at the markets after the crash, we see that bonds begin to rally substantially. This reflects a flight to safety – investors took cash out of equities and stocks and put it in Treasuries. In general, bond prices are positively correlated to the S&P 500 whereas yields are negatively correlated. This has been true since 1971 when the U.S. went completely off the gold standard. When a black swan event occurs (like the crash of 1987), the relationship between bonds and stocks inverts. You can see how the 30 year treasury leads stocks. Now, could we have predicted the move in the thirty year treasury? 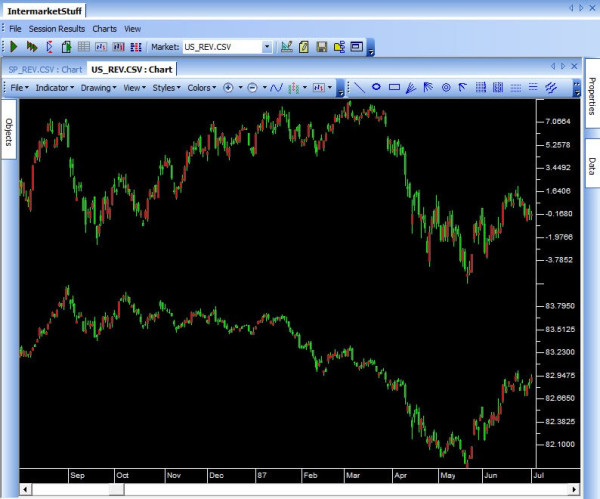 Eurodollar contract peaked in september of 1986 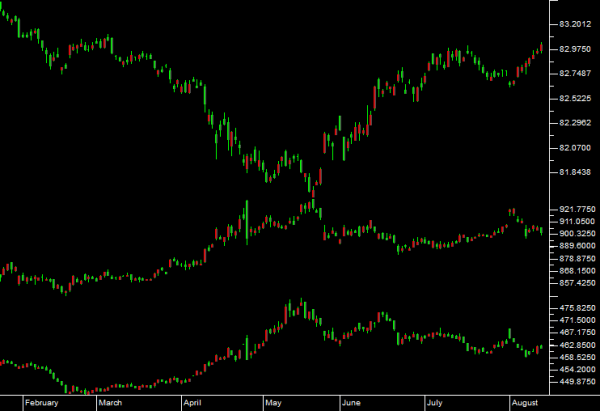 Copper futures during the period of February to August 1987 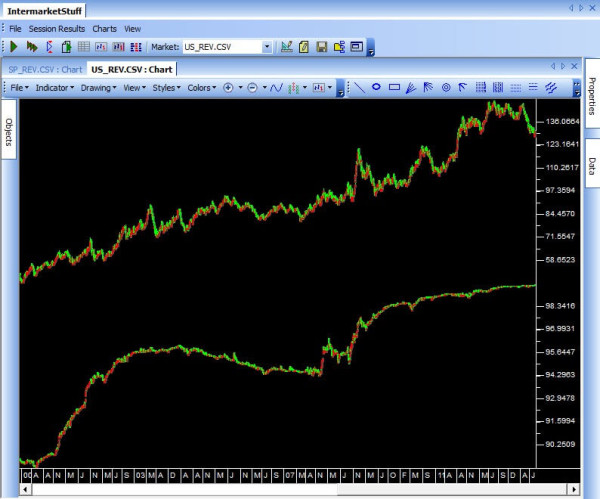 Intermarket relationship between Eurodollars and treasury bonds to break down

The fact the short term interest rates were pinned at 0 caused the intermarket relationship between Eurodollars and treasury bonds to break down. 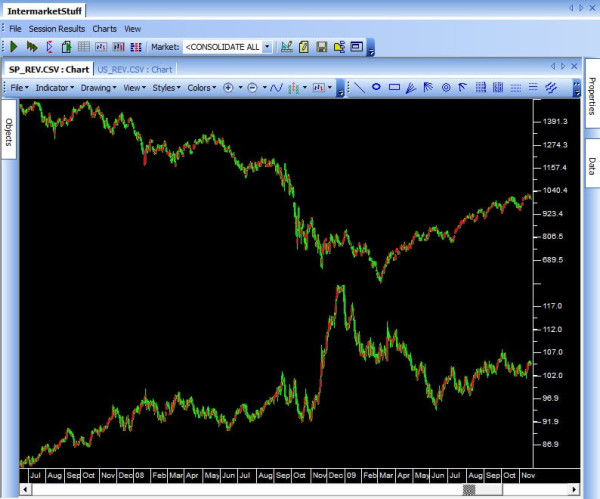 Classic relationship between the S&P500

We can see how the classic relationship between the S&P500 and Treasury bonds inverted during the financial crisis and for a year or so after. 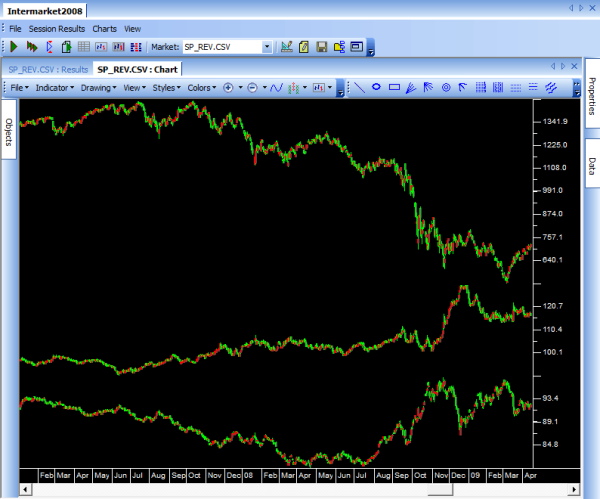 Above, we can see intermarket relationships between 2007 and 2009 for the S&P 500 as the traded market on top. Thirty year Treasury bond futures are the middle chart and the dollar index is the bottom chart. The market peaked in 2007 and bonds were generally flat, but in a very slight uptrend during 2008. During this time the dollar bottomed and then began a strong rally in August 2008. During this time, the stock market entered a normal bear market (down about 20%), and we were in a recession already, but not in a crisis. The dollar rallying during this bear market broke the market completely and the 20% selloff turned into over 50% by the March 2009 bottom.

The dollar rallied over 15% in five months and bonds re-entered a bull market rally – over 20% in three months. This was due to the financial crisis and fears of disinflation. A strong dollar can cause disinflation (fewer people can afford U.S. goods and services so prices must adjust downwards) which is dangerous to corporate profits and can cause major bear markets. Disinflation was the main problem during the depression and Japanese crisis over the past 25 years.

We can see that intermarket analysis is a powerful tool. However, relationships are not always perfectly constant and must be taken into context. Now that we have discussed this overview, the next part in this series will show how intermarket analysis can be used to develop actual trading systems (strategies) which are 100% mechanical. We will see both the strength and the weaknesses of these systems even though they are profitable and reliable. This will help us understand how we can use these simple models in context and, combined with other advanced market technologies, we can create a new generation of financial models.

For TradeStation and MultiCharts. 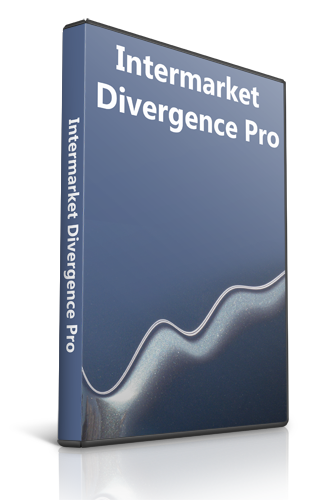 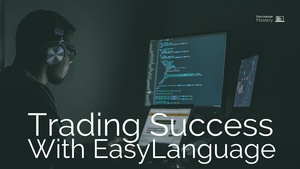