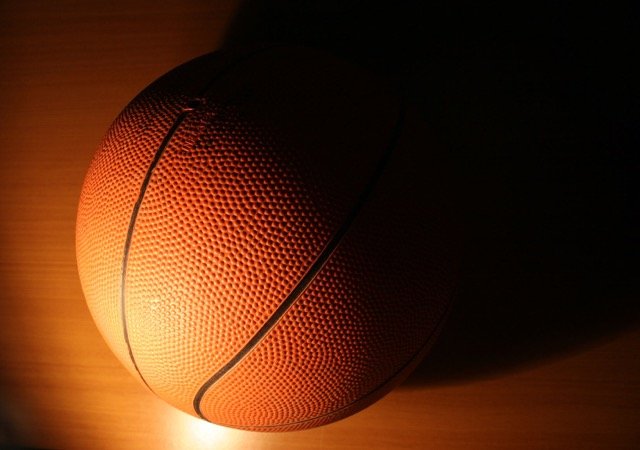 So I’ve got this great new system I wanted to share: it wins 57% of the time with a great sample size of 915 trades, only risks a meager $100 a trade, has a max drawdown of $700, has made money 9 out of the past 10 years, has a nice steady equity curve, and has made $10,207 after slippage and commissions since January 2005. Interested? Of course you are, but first let’s conduct a thought experiment before I share the details of the system with you.

My own personal definition of a system is simply, a defined set of rules that allows us to recognize when we have a perceived edge in a market place, any market place. An edge is a mathematical calculation that shows us quantitatively that, over time, we should expect to win more than we lose. So to get to the real questions, what is the goal of this pursuit? Well I don’t know about you, but I’d like to make a little money, while having fun of course, developing the systems. So if we’re in this to make money, then doesn’t it beg the question, what other “markets” can be exploited? What other systems can we create and prove we have an edge? Take a walk with me, to a completely different, yet oh so familiar market.

The system I described in the opening doesn’t trade in the world’s financial markets, but it does “trade” in an equally efficient, and equally exploitable market….the sports betting market. Now, before you jump to the conclusion that sports betting is just gambling, allow me to open your eyes. Yes, going to a casino and playing craps or 3-card stud or roulette is gambling, the house has a known edge that it knows will win over the long haul. But what if I told you that you could be the house in the world of sports betting. With the use and help of big data, we can test every theory and scenario under the sun, and find those not so elusive edges.

Human psychology not only plays a huge part in the world’s financial markets, but to an even larger degree in the sports betting markets. If you’ve read this site for any period of time, it’s been well documented that the S&P has substantial mean reverting tendencies. It is almost always better to buy on weakness and sell on strength no matter what timeframe you’re trading on, or what system you’re using. But why is that? Do you think human psychology has anything to do with it? Of course it does, it’s the fear at the major market bottoms, and the greed/euphoria at the market tops that have supplied ample opportunity (aka edges) for those that have understood how the masses think. It’s no different in the sports betting market place, the masses like to bet favorites, home teams, and the overs, this is well documented. The masses, or the “pubic” as we like to call them in the sports betting world, loves a winner and hates a loser.

The public has a very short term memory, and a team that was great yesterday is terrible today after losing last night’s game. (How many times can you recall the latest hot stock go from the penthouse to the outhouse literally overnight, and then back to the penthouse after everyone is short, it happens all the time!) It’s also well documented that the “public” consistently loses over the long run, this makes sense otherwise the bookmakers wouldn’t exist, so doing the opposite of what the public likes to do is where we need to be looking for our edges.

It’s a common misconception that bookmakers want 50-50 action on every game, then don’t. For example, the New England Patriots are a “sexy” and “winning” team, every week the bookmakers know that the “public” will bet on the Patriots every week no matter what, so to counteract this, they will slightly increase the “fair market value” line away from the Patriots. If 70% of the bets are on the Patriots every week, the sports book obviously needs to win more than 50% of the time. So taking the other side of “sexy” teams is generally the better bet. Anyways, it’s simple ideas like these that are the basis to finding your edge, and building your system.

So let’s jump right in and build the system in the opening from the ground up (this system is from sportsinsights opensource “ThinkTank” by user zaf). Data mined approaches are popular in the financial markets, and rightfully so in many cases as there is just so much more data that can be used. For sports betting models, I think it’s important that your edge be empirical and makes sense in the real world; you should be able to explain to someone why your edge exists.

The system from the opening is for the NBA (National Basketball Association), so we will only be testing this theory on NBA games from January 2005-Present (that’s as far back as my data goes). And to keep it simple, we will assume a flat $100 wager per game. Again using the theory of our human psychology that: A. the public has a very short term memory and B. Likes to bet home teams, let’s see if we can find an edge.

So everyone knows what a huge advantage home court advantage is in the NBA right? Well, not so much anymore: (chart from Tom Haberstroh) 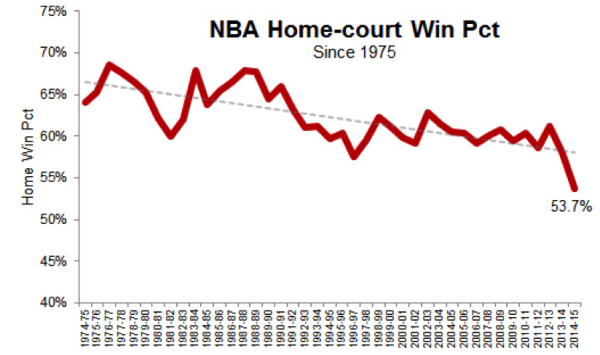 I spy a trend, there are a multitude of reasons for this trend that are beyond our scope, but the 40 year trend is very real, and the data proves this. Let’s add to the fact that the public likes to bet home teams anyway, and I think you know the first place we should be looking for our system. Visiting teams. Here is what your account would look like if you bet $100 dollars on every single home team every night, or every single visiting team every night since January 2005, the results are shocking:

If you’re a home team kind of guy, you’re probably not a happy camper, as you’ve lost more than $60,000 just betting $100 a game!! Now on the flip side, if all you ever did was bet on the visiting team, you would actually be up $1,800, an almost unbelievable contrast. So now that we know where to start, here is what betting on every single visiting team since 2005 looks like in an equity curve:

So now that we know solely betting the visiting team is an edge all by itself, let’s try and improve upon that edge. We’ll start by testing NBA games where the team that we will be betting on today lost its previous game.

As you can see, just this filter alone gives us a 2,843-2711 record, but because of the juice, or vig, which is the house’s take (generally speaking, the house will take about 5-10 percent of your winnings each bet, so if you bet $100 and win, you will only be paid $95-$90 in winnings…think of it as the slippage and commissions of sports betting) this filter alone isn’t enough as we lose $353 dollars overall. Next, let’s try adding another filter. Let’s say that the team we are betting on is a good team (we’ll define “good” as winning 55% or more of your games), but just so happened to lose their previous game (penthouse to the outhouse). We can add a filter of “team winning percentage” to the previous filter of “losing their previous game”: 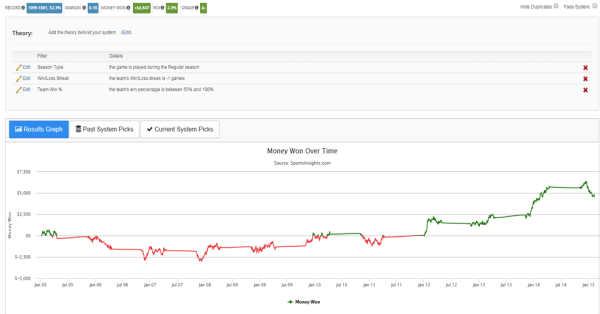 So that certainly helps, we now have a record of 1099-1001, good for 52.3%, an improved equity curve, and after the juice is taken out, we’ve made $4,847. But we’ve still got about a 3- year period where we are under water, so I think we can do better. So now armed with the above system, let’s take a peek to see if that visitor/home edge still exists: 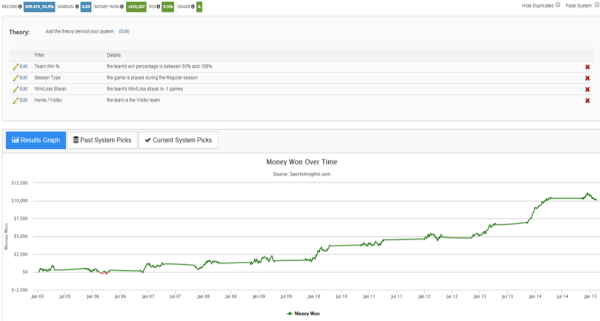 So there she is, three very simple filters that make real world sense, and make real world money. Using a system such as this, you in essence become the house, your expectancy says that you will win over the long haul. And the beautiful part about all of this is that there are literally thousands of systems just like this that are not hard to find if you’re willing to look.

Once you have a certain number of systems, the name of the game then becomes the number of plays you can make every night. If you have systems for all 6 major US sports (NBA, NCAA BBall, NFL, NCAA Fball, NHL, MLB) and you have an average edge of 5-7%, over the course of say 2500 bets a year, that adds up really quick. Cocktail napkin math here: 2500 bets $100 a bet= $250,000, $250,000.05= $12,500 a year, but you can of course bet much, much larger than $100 a bet, and if you have a really good year, you can win almost 60% of your bets (don’t expect that though). Normally when I find a new system, I let it “soak” or sit for one entire season as a kind of walk forward/out of sample test. But because I found this system a year and half ago, I consider the out of sample test complete.

In conclusion, I hope I at least opened your eyes to a different kind of market, and a different kind of system. There are so many parallels to sports betting (not gambling) and systems trading I don’t know how anyone can be interested in one without being interested in the other. If you start to do your own testing in the sports betting market, there are a couple things you should always keep in mind: