Finding Out What Works, And What Doesn’t Work – Part II

In Part 1 of this series, found here, I ran a simple study of a trading system, in order to look at some of the common components (such as end of day closes, short versus long bar periods) that many system developers add to their trading system. Could some of these strategy building blocks be hurting their development efforts? To answer the question, I analyzed one trading system over 7 different markets for a 5 year period. Even though I was able to extract some conclusions from the study, I also said the following:

To summarize the earlier work, the conclusions from Part 1 were:

In this second part of the study, I’ll now look at a different group of markets, a completely different strategy and some different timeframes. I’ll also try to answer the following questions: Will the conclusions still hold up? What type of insights, if any, do conducting studies like these actually provide? Finally, can studies like these improve your own strategy development?

Previously in Part 1, I tested 7 different markets across a range of commodities.

For Part 2, I will test another basket of commodities.

I will also test the period 1/1/2012 to present, a smaller test period outside of the range previously tested.

Finally, I will assume $5 round turn commissions and $30 round turn slippage.

I will use two extremely simple base strategies for the tests I am running: a simple breakout based on closing prices (Strategies A and B), or a reverse breakout (countertrend – Strategies C and D). In all cases, the breakout length X will be varied from 5 bars to 100 bars.

Here is the code for all four versions of the strategy: 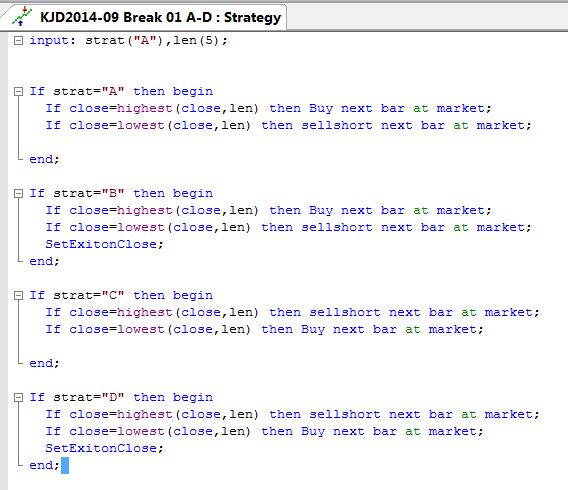 First, I will conduct a test of Strategies A and B for the same period, with the second group of commodities. To keep things manageable, only the group summary results are shown below:

Strategy B- Breakout, Exit of the day

no data shown for cases where maximum net profit <$0

no data shown for cases where maximum net profit <$0

The results of Group 2 are generally in line with Group 1 results, which show that swing trading (strategy A) is better than intraday trading (Strategy B), and that longer timeframes are slightly better than short timeframe bars.

Of course, concluding that long timeframe bars and swing trading is superior based on only a few tests is dangerous. So, let’s look at Strategies C & D (the opposite Strategies of A & B), and see if the results have the same tendencies for different timeframes and test period, on a random subset of Group 1 and Group 2 instruments.

For timeframes, the results show a tendency for the smaller timeframes to be better than the longer timeframes, exactly the opposite of what was found earlier. But this effect is small, which could mean it is not actually true, and could be just an artifact of the limited testing. This is a good example why it is dangerous to draw conclusions from only a few tests.

Through both Part 1 and Part 2 of this study, a lot of tests have been run over various bar timeframes, instruments, strategies and time periods. Yet, it would be dangerous to make any sweeping conclusions based on these tests. Although these results show that intraday trading is less profitable than swing trading, there are surely cases where intraday trading is preferable over swing trading.

So, what can this study actually teach us? I think the following lessons come out of this study:

The key to successful strategy testing and development is to keep an open mind, and allow the data to point you in the right direction. At the same time, though, don’t let the data trick you into making false conclusions or sweeping generalizations. Remaining flexible in your development approach can lead to new and profitable strategies – ones that you might now be dismissing based solely on past testing.

If you would like to learn more about building trading systems be sure to get a copy of my latest book, Building Winning Algorithmic Trading Systems.