Inverting The RSI and VIX Strategy 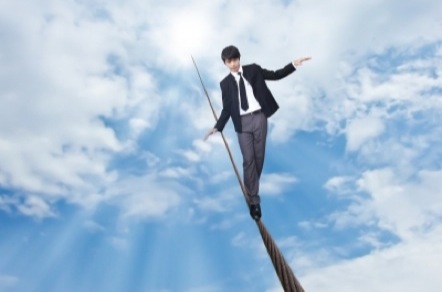 Today we look at a reader’s question and reverse our RSI and VIX strategy to take short positions. Let’s do this and see if any edge awaits us.

As pointed out in a previous article, “Profit By Combing RSI and VIX“, combining RSI and VIX can be a profitable strategy for trading the S&P. If you’re not familiar with this simple yet powerful strategy, please take a look at the previous article first. Shortly after the original article was posted a reader asked what would this strategy look like if we reversed the rules and took short positions.

It’s an interesting idea and something I’ve not tested in many years. Here’s why. First of all I’m not a big fan of long/short symmetry with trading systems. The difference between market psychology between bull and bear market participants can be huge. Thus, simply reversing long only rules to trade the short side often proves to be ineffective. This may not always be true, but it has been my general observation. Furthermore, based upon past testing I seem to recall that many of the Connors RSI strategies don’t do so well on the short. However, it’s still a great idea to test.

The Orginal Rules (Long Only)

As a reminder here are the orginal rules for taking long trades.

Just as a reminder I’m going to reproduce the original equity curve below so we can compare it with our new shorting based equity curve. 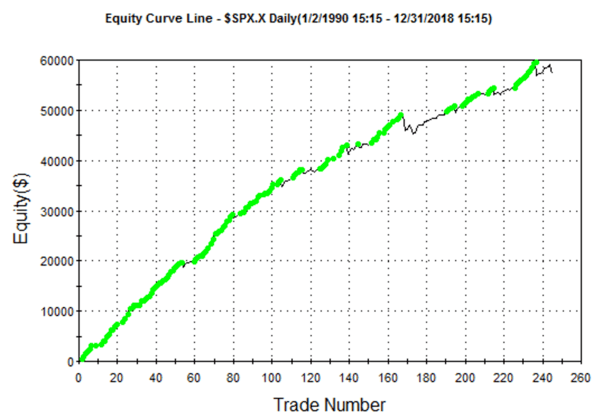 Environmental Settings
I coded the above rules in EasyLanguage and tested it on the S&P cash market going back to 1990. Before getting into the details of the results let me say this: all the tests within this article are going to use the following assumptions:

Please note we are not adding our profits to our trading account! We are always trading a small percentage of our starting capital. Thus, the results demonstrated here are very conservative and it would be easy to generate much higher returns.

For an example of what the trades will look like on a daily chart, below is an image of a couple of trades. Those short trades were opened when the VIX-based RSI fell below 10.

Baseline Results
Below is the equity curve for trading the S&P cash index based upon the rules as defined above. 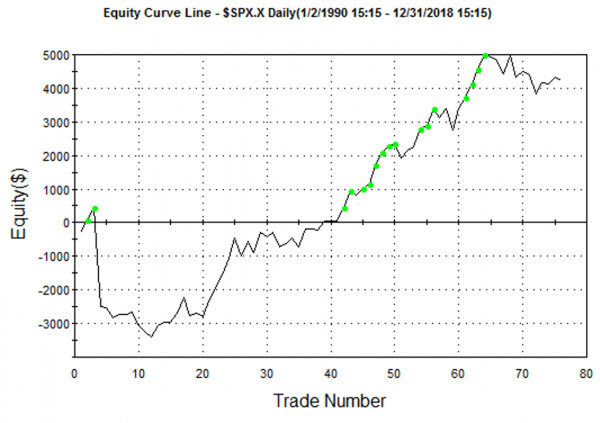 Well, we do have a rising equity curve but it’s not very impressive. First, there is just over 70 trades which is not very many given the number of years of historical data. The original bull version had around 240 trades. Second, you will notice for many years the system was in negative equity. Not until around 2003 did the system start to produce positive equity. Both of these observations are most likely due to the strong bullish tendency of the U.S. stock market over the past few decades. Shorting the broad U.S. indexes has fewer opportunities and it’s not as simple as reversing the original bullish rules.

One example of a successful shorting system for the broad U.S index is a system called the “Simple Shorting System“. Take a look at that article for an interesting shorting strategy along with how to combine it with a long strategy.

Getting back with our shorting strategy… 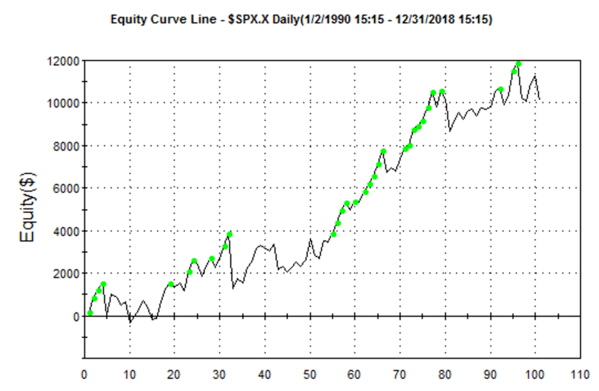 This looks a lot better. Even going long during a bear market produces better results than going short. The system is finding high probability points where the market snaps back. When you compare the above equity curve with the original rules you can clearly see taking trades above the 200-day moving average produces a much smother equity curve.

In Closing
It’s clear that simply reversing the rules do not produce viable results. Going long during a bear market creates better results than one might first imagine. The bear market long trades might be impoved by requiring deeper pullbacks. Bear markets often see strong thrusts downward in price so focusing more on these may improve results. One way to do this would be to have stricter requirements such as selling when RSI(2) is below 5 or when RSI(2) is below 10 for three or more consecutive ideas.