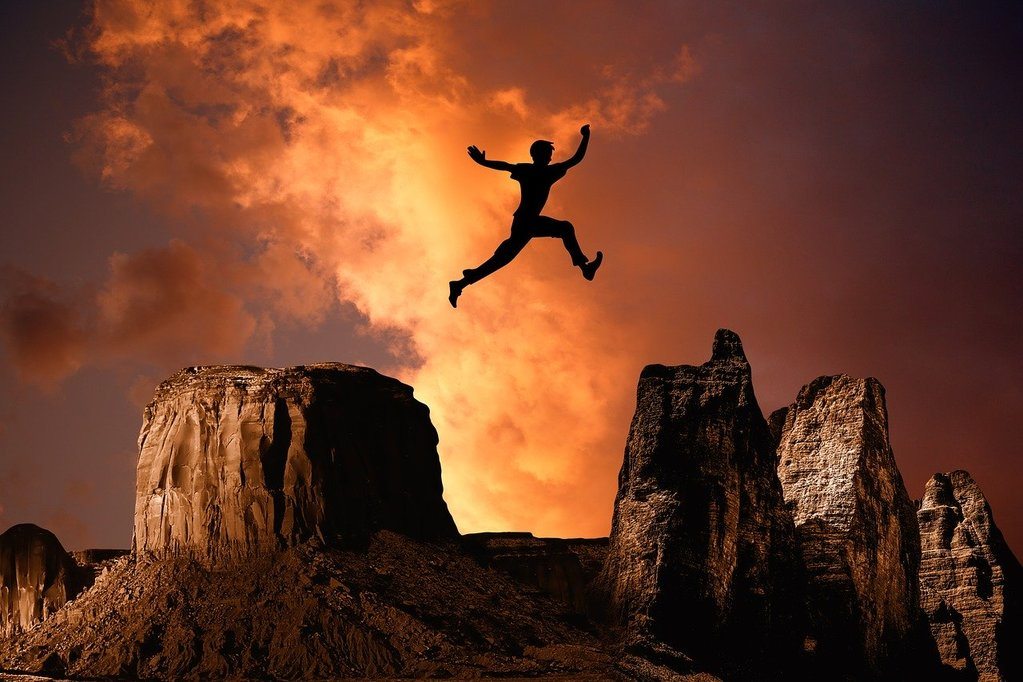 Is Gap Trading Profitable? Here Is How You Make It Work!

When you are looking into becoming a profitable trader, you are exposed to a lot of different options when it comes to the trading style itself. You not only have to choose between mean reversion, trend following, or breakout trading, but also have to consider which variant you are going to use. The most common trading styles entail numerous types of strategies that use different rules, but still rely on the very same principle. Gap trading is one sort of trading that really does not fall under one single category, but still is used by quite a lot of traders.

So how do you know which gaps are worth acting on, and which are not? Well, that’s one of the many things we’re going to look closer at in this article. In addition to this, you’ll also learn:

As you see, we have a lot to cover, so let’s not waste time, but get right to it!

Gaps are price ranges where no trading activity was recorded, which leaves a blank space in the chart. For instance, if the market closed on $100 and then opened on $101 the next day, an empty space would form between the close of the previous bar and the open of the current bar.

As you probably know, gaps are classified as bullish or bearish, depending on if they’re positive or negative.

The Reasons Why Gaps Form

Gaps can form under various circumstances, ranging from the most common reasons, which involve changing market sentiment overnight to low liquidity.

Below we’re going to look at the three most common scenarios when a gap forms in the market:

This is what most people are alluding to when they speak of gaps, and most common gap trading strategies make use of overnight gaps to find profitable trading entries.

Overnight gaps occur when the daily open price of the market is higher than the close price of the previous day. In short, these types of gaps tend to be caused by two factors:

The latter is a tendency that is especially noticeable in the stock market, where most long term returns, as a matter of fact, occur overnight. Just view the chart below, where it’s clear that ALL returns over the last 20 years or so have come in the form of overnight gaps. 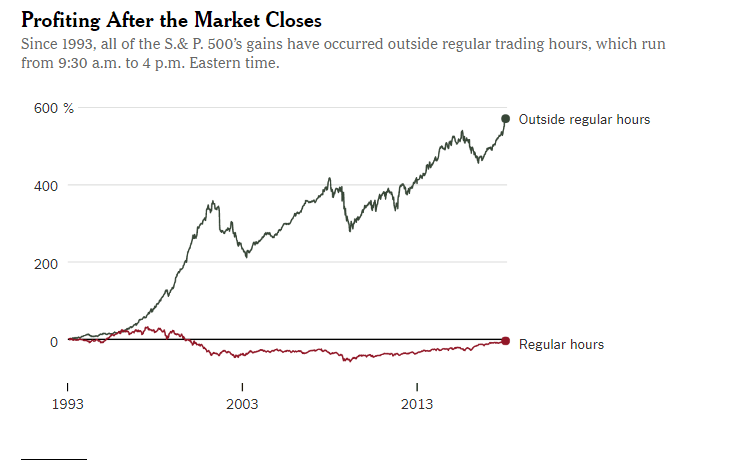 Weekend gaps work quite the same as overnight gaps, with the main difference that the time the market is closed is longer.

Intraday gaps are uncommon in very liquid markets where there nearly always is someone to take the other side of the trade at or very close to the bid price. For instance, it’s unlikely that you will be able to spot big gaps in the 5-minute resolution chart of the S&P500 futures market, which is the most traded futures contract on the market.

However, if you were to look at a market that isn’t traded as heavily, you would definitely note some empty spaces between bars here and there. For instance, have a look at the intraday chart of the rough rice futures market. There's a lot of gaps! 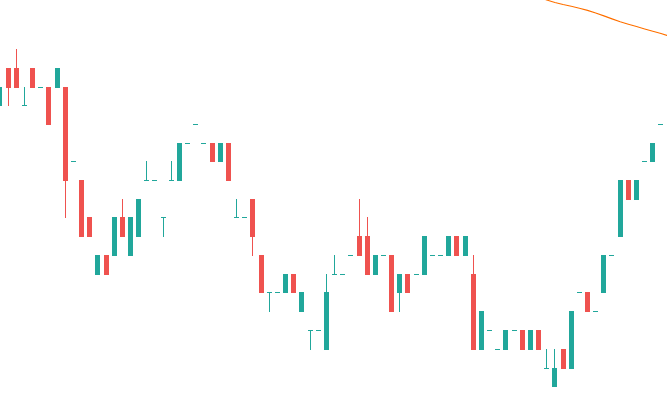 Intraday gaps aren’t nearly as significant as overnight or weekend gaps. Therefore, most trading strategies don’t use them, since their impact on the market generally is quite insignificant.

The Different Types of Gaps

In general, traders refer to three types of gaps:

The biggest difference between these types of gaps can be said to be the conditions under which they form, and of course, their meaning. So let’s look closer at them!

The common gap, often called the area gap, or just trading gap, tends to form in trading ranges or very congested areas. According to traditional technical analysis, these gaps tend to be filled fairly quickly, meaning that the price is inclined to find its way back to the beginning of the gap. In the image below we see examples of two common gaps, which got filled fairly quickly. 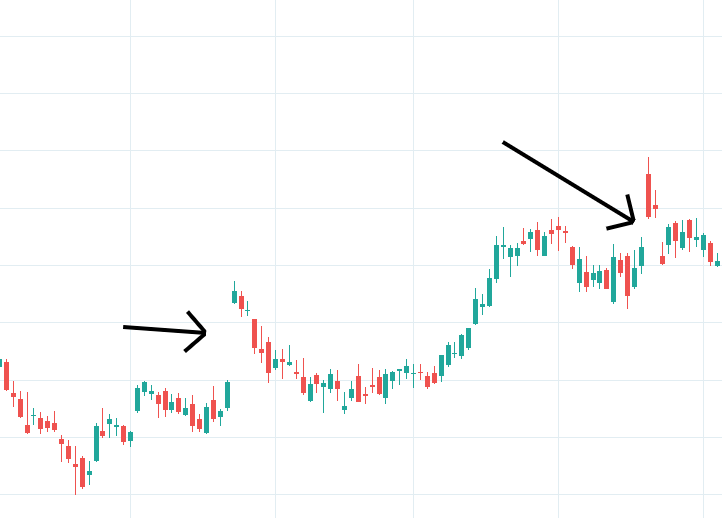 Exhaustion gaps form when the market has pushed itself to the end of the current uptrend or downtrend, and is lacking the strength to continue in its direction, performing its final death throes in the direction of the trend.

In markets like stocks and equities, exhaustion gaps can be used together with oversold and overbought market conditions, to improve the odds of a reversion of the trend. This has to do with the mean-reverting traits of those markets, meaning that they tend to revert after having performed outsize moves in either direction. 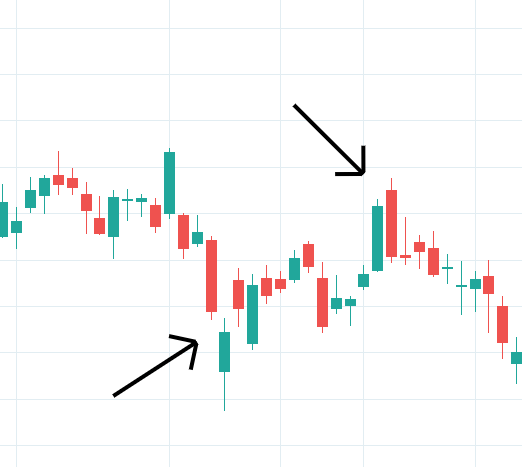 The last type of trading gaps are runaway gaps. In short, these are big, strong gaps that occur in the direction of the main trend, and signal that the trend is likely to continue.

Runaway gaps can be very hard to distinguish from exhaustion gaps, and most of the time, they’re nearly identical. In order to know if a gap qualifies as a runaway gap or exhaustion gap, you have to know the characteristics of the market you are working with, and how it responds to gaps in general.

The Two Approaches to Trading Gaps

There are two approaches to trading gaps.

The first approach, which is fading, assumes that gaps are likely to be filled. As such, a fading strategy will enter in the opposite direction of the gap.

The other approach, where you follow the gap, assumes that prices are going to continue in the direction of the gap. As such, it becomes a sort of breakout. 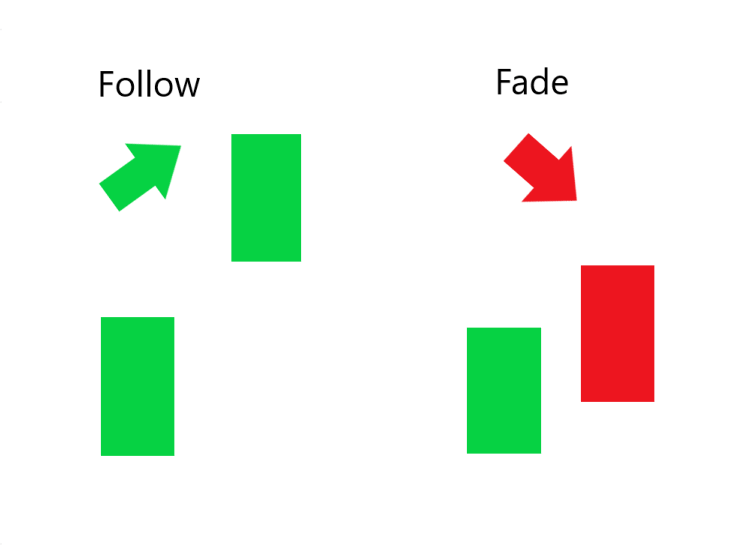 The rationale behind fading is that the market is likely to fill the gap distance, and perhaps move even further in that direction. But does this hold true?

Well, as with everything else, the tendency of a market to fill the gap will vary a lot depending on the market that’s traded.

However, in another article on The Robust Trader, a test was carried out where it looked at the fill-rate of gaps in the S&P500. In short, the results told us that:

While the study only looked at the fill rate of gaps during the day following the gap, it definitely can be a valuable read, and we recommend that you have a closer look at it!

How to Build Your Own Gap Strategies 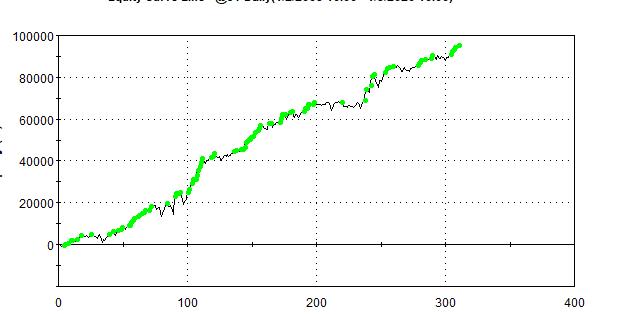 Gaps in themselves seldom are profitable enough to be traded right away, without additional filters and conditions. By adding more criteria, you attempt to only take the trades that have the best odds of ending as winners, thus increasing the profitability of the trading system.

These are some of the filters we use when constructing gap strategies. However, to know what works you need to use some sort of validation method. In short, you can choose between:

Forward testing and backtesting are often used together. Usually you first backtest the strategy and then use forward testing to validate your results.

If you want to learn more about how we build our trading strategies, we recommend that you look closer at our big pillar post on how to build a trading strategy.

Gap trading can be really profitable if carried out in the right manner. This includes taking the right approach (fade or follow) for the market you are trading, and also adding the appropriate filters and conditions to become more selective about the trades you take.

It really is important to be aware that most gap trading strategies don’t work per se, but must be validated using the methods shown in this article. And even then, you may risk curve fitting the strategy.

Strategy validation is the most important part of the strategy creation process, and should not be overlooked. Everybody can create a good looking equity curve, but only a few will manage to get it working into the future. And after all, that’s all that counts, right?

About the Author Håkan Samuelsson