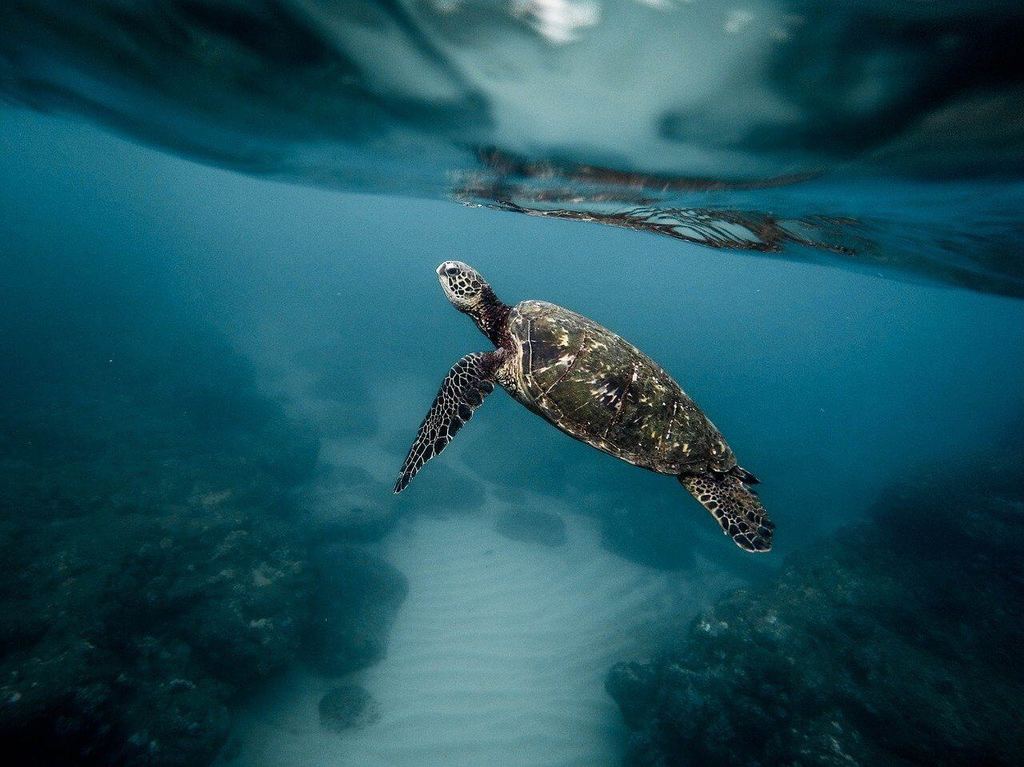 The Legacy of the Turtles and the Birth of SuperTurtle

Like the moving Trading Places, which was released the same year that the Turtle story started in 1983, two people were having an ongoing dispute about nature versus nurture (can trading prowess be taught to everyone, or was it innate in just a handful of people). This debate was between Richard Dennis and his long-time friend, Bill Eckhardt. Richard believed that he could teach people to become great traders by following a simple set of rules. Bill thought that genetics and aptitude were the determining factors. To settle the matter, Richard suggested that they recruit and train some traders and give them actual accounts to trade to see it truly was either nature or nurture.

They took out large advertising positions for trading apprentices in Barron’s, Wall Street Journal, and New York Times. The ads read that after a brief training session, the trainees would be supplied with an account to trade. Out of 1,000 applicants from these ads, they interviewed 80 and hired 10 of them.

Richard added three more people he had already known, which made the final Turtle group 13 people. These “Turtles” were invited to Chicago and trained for two weeks. They began trading small accounts at the beginning of January 1984. After they proved themselves, Dennis funded the “Turtles” with allocations ranging from $500,000 to $2,000,000 at the beginning of February. The allocation was based on success and other factors.

“The students were called the ‘Turtles.’ (Mr. Dennis, who says he had just returned from Asia when he started the program, explains that he described it to someone by saying, ‘We are going to grow traders just like they grow turtles in Singapore.’)” – Stanley W. Angrist, Wall Street Journal 09/05/1989.

The Original Turtle System used a simple Donchian channel breakout as its core foundation. According to Perry Kaufman, Playboy’s Investment guide in 1971 published an article on the Donchian’s 4-week rule and describing it as a “childishly simple” way to invest.

The Donchian breakout is astonishingly simple and effective. Even today, after more than 50 years of being in the public domain, it is still profitable. The system complies with three basic tenets of trading:

The Turtles added additional rules. For example, they used a longer period for the channel length if the last trade was profitable. Plus, they added several other money management rules. The Turtle system from the early 1980's until the mid-1990's was very profitable.

From the mid-1990's, the Turtle system has been highly profitable in a handful of years but has lost money in the other years. It was not as consistent as it was the previous dozen years. This is where we start the story of SuperTurtle.

Larry Williams, the person I was working for at the time, came to me in late 1995 and told me that the Channel breakout system was the workhorse of institutional money. The system had begun to degrade because trends started to deteriorate quicker.

He also told me he used volatility to adjust the channel's period, but that did not work well. My idea was based on the market concept following two modes: a weak form of market efficiency, and the other was a trend mode. Let's explain this concept.

If we assume the dominant cycle is 30 days, then the market should go up for 15 days and down for 15 days – imagine a sine wave that starts at the origin and reaches its first amplitude at 7 ½ days and then crosses the x-axis on day 15 and then mirrors itself below the x-axis. Movement within this band of a 15-day high or low should follow a random walk.

If we set a two standard deviation move beyond that 15-day high or low (30-day total), we have moved beyond the banding, which defines random walk, and we are in trend mode. We use a multiplier of the dominant cycle as the method to set the channel length. Larry and I used this concept in several systems which were subsets of the Turtle system but not the Turtle system back during the 1990's.

How did we calculate the Dominant Cycle?

I used several methods, including my version of MEM (maximum entropy method) to Hilbert Transform to use Autocorrelation Periodogram. MEM - when I was researching it back in the 1990's was too slow to optimize on a basket. My early versions of this system ran so slow we could not get results on a large basket before the next day’s open. The problem with MEM is it has several parameters that can be tuned and, therefore, increase the optimization space and computer resources required – in other words, computer and time overload.

In 2006, I first revisited this idea and used the Hilbert Transform. This algorithm had some built-in lag but was quick to calculate. I used this to develop the first SuperTurtle™, which was on the top 10 basket system list on Futures Truth for 14 years, over 90% of the time. In 2020, I once again updated this system using the Autocorrelation Periodogram. This algorithm is quick and also good at finding the first three most powerful cycles. This algorithm uses autocorrelation and runs an FFT on the correlations to calculate the spectra.

I released SuperTurtle Version 1 in November 2005. This system used the Hilbert Transform and was optimized on a basket of markets in TradersStudio. SuperTurtle was featured in the Futures Truth Top 10 list almost but not quite every issue over the 15 years since it was released until Future Truth stopped publishing.

In late 2020, I decided to update SuperTurtle. My research resulted in me adding more adaptive parameters instead of fixed-length versions. I also incorporated the Autocorrelation Periodogram, based on John Ehlers' work. But I also added a twist to the standard algorithm with a set of filters that can be tuned to longer cycles than what John did in his book.

I wanted first to release a TradeStation version of SuperTurtle 2020, and this required me to create a TradersStudio version that matches the TradeStation as close as possible. This was not easy because the cycle analysis algorithm did not match in both platforms. TradeStation only carries seven decimal points in a standard variable, so we had to work to make TradersStudio C++ code to match the output from TradeStation EasyLanguage.

Why does a better dominant cycle estimate create a better trading algorithm?

Let's now look at how this concept of adaptive channel breakout based on the dominant cycle improves the turtle system's results. We will start by optimizing all the parameters of the Turtle system on 25 markets. This will be the best case performance measure and act as a bogey to compare our SuperTurtle™ results to. 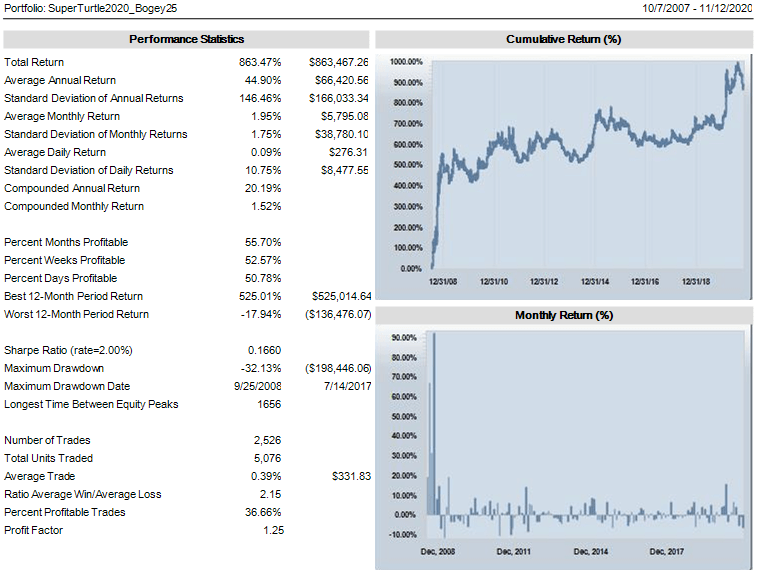 These numbers are very impressive, but remember they result from a complete search space optimization to come up with the absolute best results. In other words, no stone was left unturned to create the best of the best equity curve. Had those multi-million-dollar CTAs that were mentioned earlier been trading this, they would not only still be in business, but they would be thriving. The single parameter set that created this equity curve was quite different from the original Turtle algorithm. 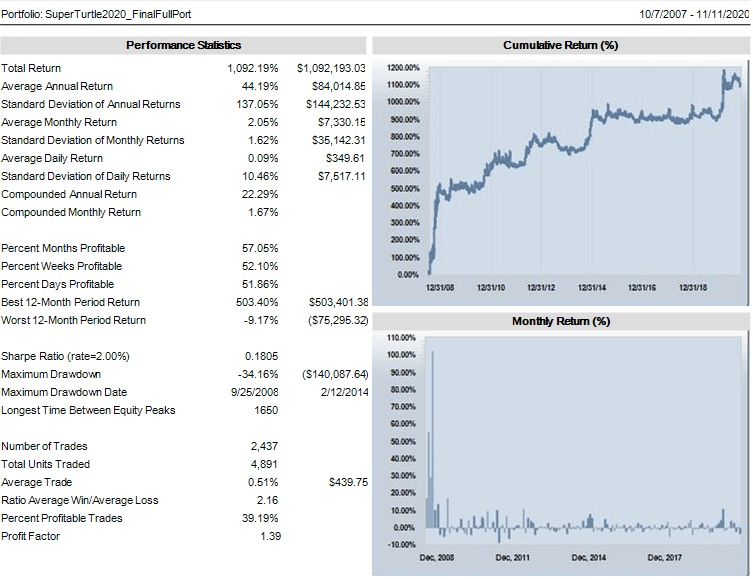 The performance report above shows the same 25 market portfolio with the same commission of $3.12 and $12.50 per side on a one lot basis. Notice how this test demonstrates using a Dominant Cycle is superior to the original Turtle system even with optimization over a partial search spectrum.

A complete spectrum search would take much more time. However, I feel like the chosen parameters are stable and close to a robust global maximum.

There is some hefty math involved in this new version of SuperTurtle. If you're new to building strategies, you'll want to experiment with the original Turtle Trading concept. It's much more straightforward, and you can learn a lot! So, check out the following article on EasyLanguage Mastery, The Complete Turtle EasyLanguage.