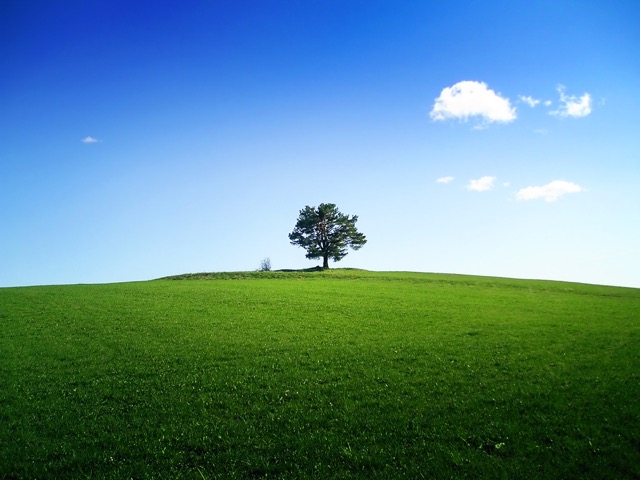 [NB. OK, it's possible that this isn't absolutely the simplest trading system imaginable, but apart from buy and hold it is unlikely there are many systems much simpler than this one!]

The following chart illustrates such a portfolio for the FTSE 100 Index since 1995. The diamond markers indicate the decisions made at the end of each month whether to be in the market (green diamond) or in cash (red diamond). 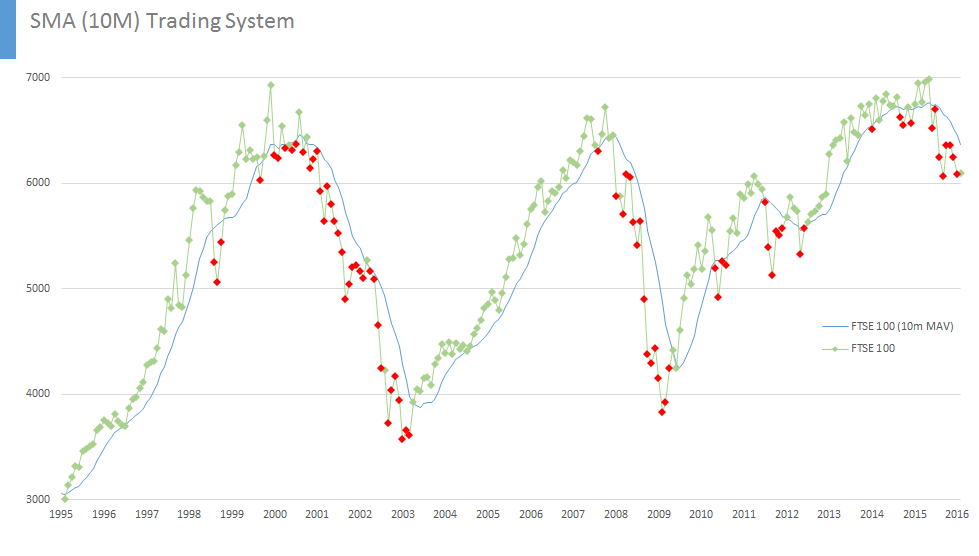 Roughly, one can see that the system kept the portfolio in the market in uptrends and out of the market (in cash) when the market fell. This trading system is well-known in the US, what we will look at here is:

First, let’s look at the overall profitability of SMATS.

The following chart plots the values of the SMATS portfolios for the 14 different simple moving averages (i.e. 4-month to 16-month). As a benchmark the FTSE 100 is added (i.e. this is the value of a buy and hold FTSE 100 portfolio). All values were re-based to start at 100. 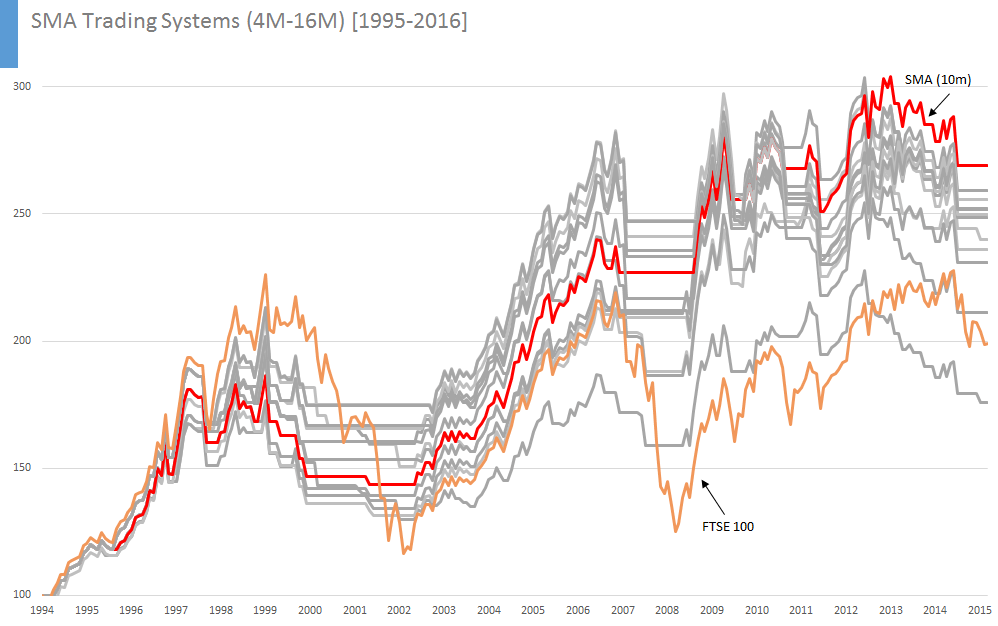 The following chart summarizes the final portfolio values in 2016 after running the trading system from 1995. 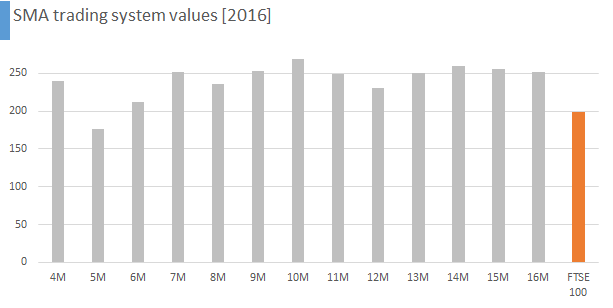 We’ve looked at profitability, let’s now consider the risk incurred by each portfolio. We’ll use volatility as a (fairly standard) proxy for risk.

The following chart shows the volatility of the portfolios over the 20-year period. 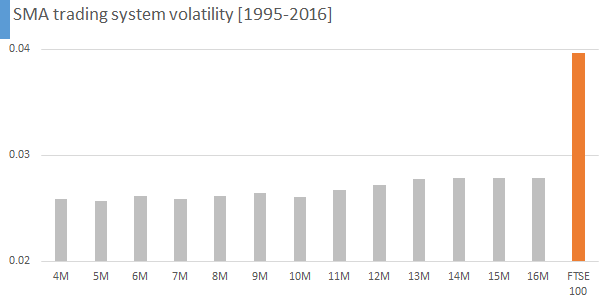 Not surprisingly the FTSE 100 had the highest volatility. The volatility of the SMATS portfolios was less due to the fact they were in cash for part of the time; broadly their volatility increased as the moving average month parameter increased.

The Sharpe Ratio combines returns with volatility to provide a comparative measure of profitability per unit of risk incurred. The ratio’s purpose is to answer questions of the form: is the profitability of a strategy justified by the risk incurred, compared to another strategy? 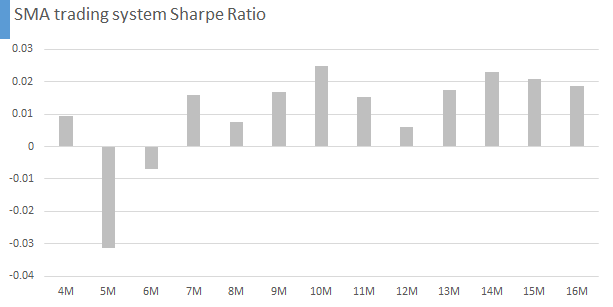 Maximum Drawdown decribes the maximum loss a portfolio suffered from a previous high value. For example, in this test SMATS(10) had a max drawdown value of 22.8%. This means that over the 20-year test period the portfolio was at most 22.8% under water (from a previous high).

The following chart shows the max drawdown values for the 14 SMATS portfolios and the FTSE 100 Index. 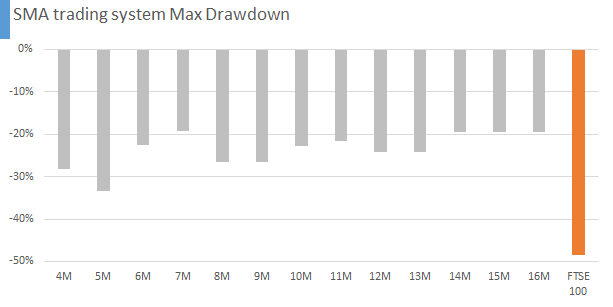 Here the SMATS(10) portfolio only had a middling relative score. The best portfolios (i.e. those with the lowest max drawdowns) were: SMATS(7), SMATS(14), SMATS(15), and SMATS(16).

The following chart shows the average number of trades for the year for each portfolio. For example, over the 20-year test period SMATS(10) portfolio traded 36 times, which is an average of 1.7 times a year. 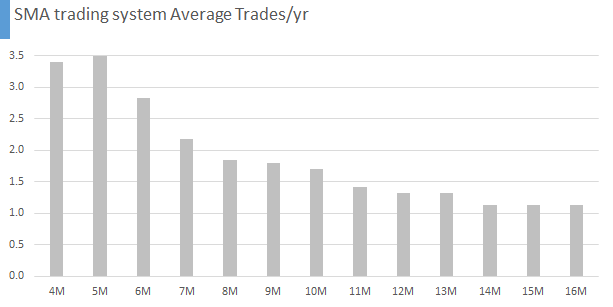 As would be expected the number of trades decreases as the length of the moving average month parameter increases. In other words, systems get whipsawed less with longer moving averages.

The following table summarises the above analysis. The values are colour-coded with green being the best value through to red being the worst for each respective analysis.

-- By  Almanacist from Stock Market Almanac