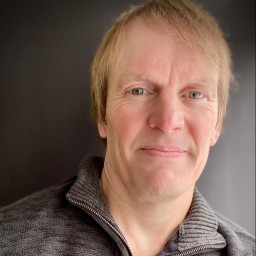 EasyLanguage can be a powerful tool for day traders who want to take advantage of intraday price fluctuations in the S&P 500. This article looks at a study that can help you determine when it might be advantageous to go long on the index.

The key to successful intraday trading is securing that elusive edge. System traders often look for price patterns that will give them an indication as to when to go long or short. In this article, I'll highlight the first step you want to perform before attempting to build your trading system.

We're going to explore the S&P 500 intraday price data from 2000-2021 to find out what type of trading system and market conditions will be most favorable for the building of an intraday system. Read on as we reveal our findings!

Before building a trading system, we're going to perform an intraday price study. We're doing this to determine if we can find an edge. We want to answer a couple of questions before building a system.

I'm going to be using the S&P E-mini futures market, but the principles here could be applied to any market.

Our first step is to break a trading day into five market sessions. We do this to see if a particular session is more profitable than others.

Now that we have these various times defined, I want to create two simple trading strategies. Each system with represent a different trading style.

Generally, we can attempt to trade the market with either a trend-following strategy or a mean reverting strategy. Trend following implies the market is moving in a particular direction, and we expect it to continue.

The trading systems should be straightforward. I’m not looking to create a trading system to trade per se, but I am attempting to locate clues as to what type of trading strategy (mean reversion or trend following) might work during a particular session. To keep this simple, I’m going to explore trades on the long side only and will be looking at the trading days between 1/1/2000 and 12/31/2021.

I will use a 10-period RSI for the mean reversion entry rule and enter a long position when the value is less than 25.

For the trend following the entry rule, I will use the 10-period momentum calculation and open a long position if the momentum is below zero.

The next question we want to answer is, what market conditions does our trading system perform best? I often will make use of a market regime filter when I’m developing a trading system. This filter breaks the market into two distinct regimes: bull and bear.

Using this filter will limit our long trades to only be taken when the price is trading above the 200-period moving average on a daily chart. In other words, we will take trades in the direction of the overall market trend.

We're ready to start our study.

BULL MARKET: I will apply the trend-following strategy across the five sessions. I will only take long trades during a bull market when our momentum indicator is above zero. I will close each trade at the end of the period.

The result shows that during a bull market, there is an edge with momentum trading during The Post-Market session. So, if you're looking for a long intraday strategy, you may want to focus on this session.

Taking long trend following trades in a bear market sure looks different! None of the options look good. The only exception is the close. It seems there might be a slight edge during the last minutes of the daily session—a rally into the close, which I've seen in other studies.

BULL MARKET: Now, I will test using our mean-reversion trading system rules over the five different periods. I will only take long trades during a bull market when our mean reversion indicator is below 25.

Only The Close session holds any promise. The $63.56 per trade is a vast value covering two ticks of slippage and commission. If you're building a mean reversion strategy, check out The Close session during a bull market.

BEAR MARKET: I will now test using our mean-reversion trading system rules over the five periods during a bear market. In other words, I will only take long trades during a bear market when our mean reversion indicator is below 25. This is the opposite of the test we just performed above, and it is also a counter to the prevailing major market trend.

Here we see our best edge can be found at The Open during a bear market. However, it's not a very strong edge.

I took all the results from above and put them into a single table, below. Now you can sort by Average Net Profit Per Trade by toggling the "triangle" on the column header.

By sorting the average net profit per trade from highest to lowest, we can see what bubbles up to the top. We can presume that these are the best opportunities for building an intraday long-only trading system.

The best performing sessions are:

Interestingly, the closing session holds the most promise. Notice the top sessions are mean reverting strategies during bull markets.

Below are the equity graphs of the top three performers. Click on each image for a larger view of the equity curve. 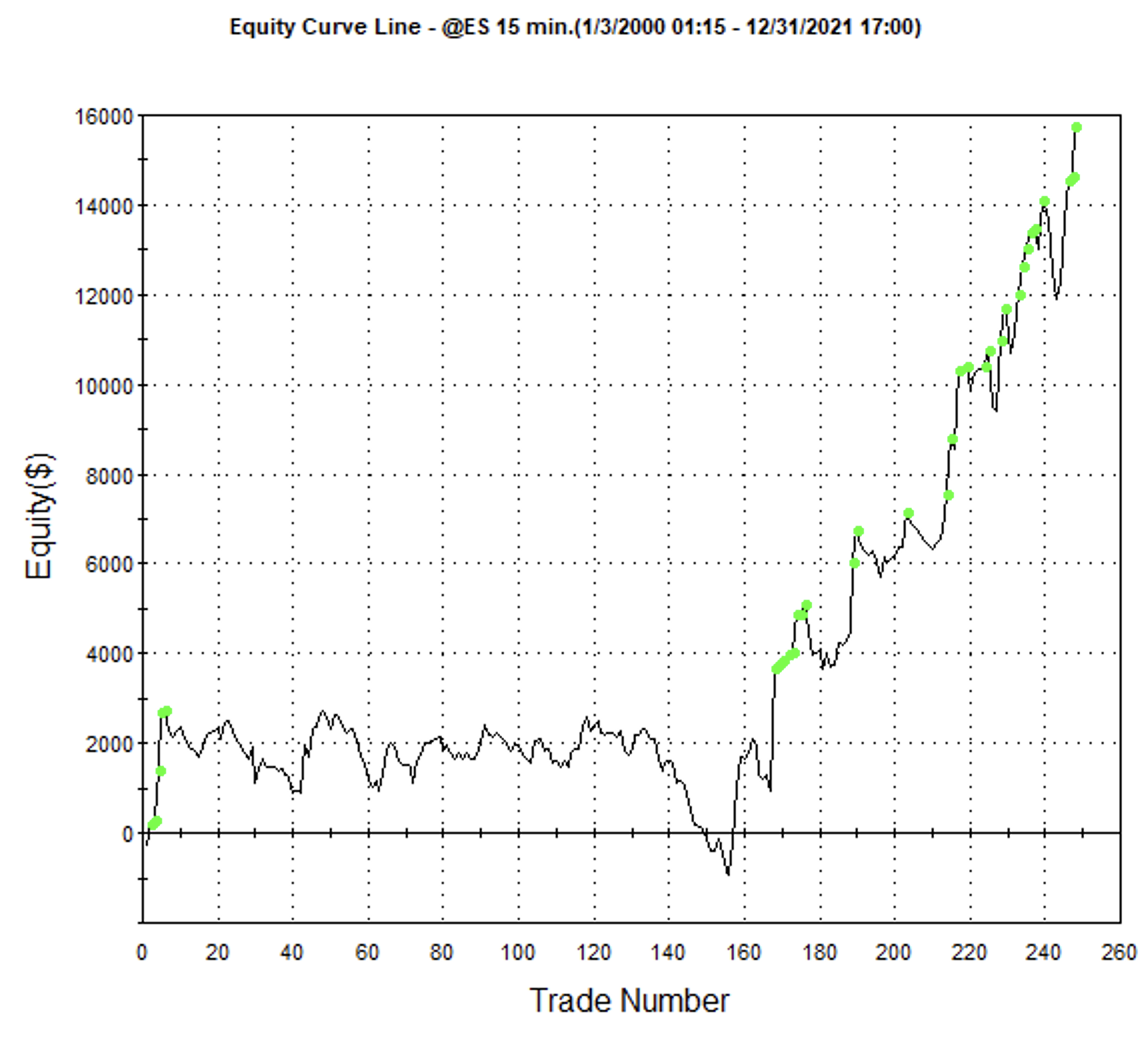 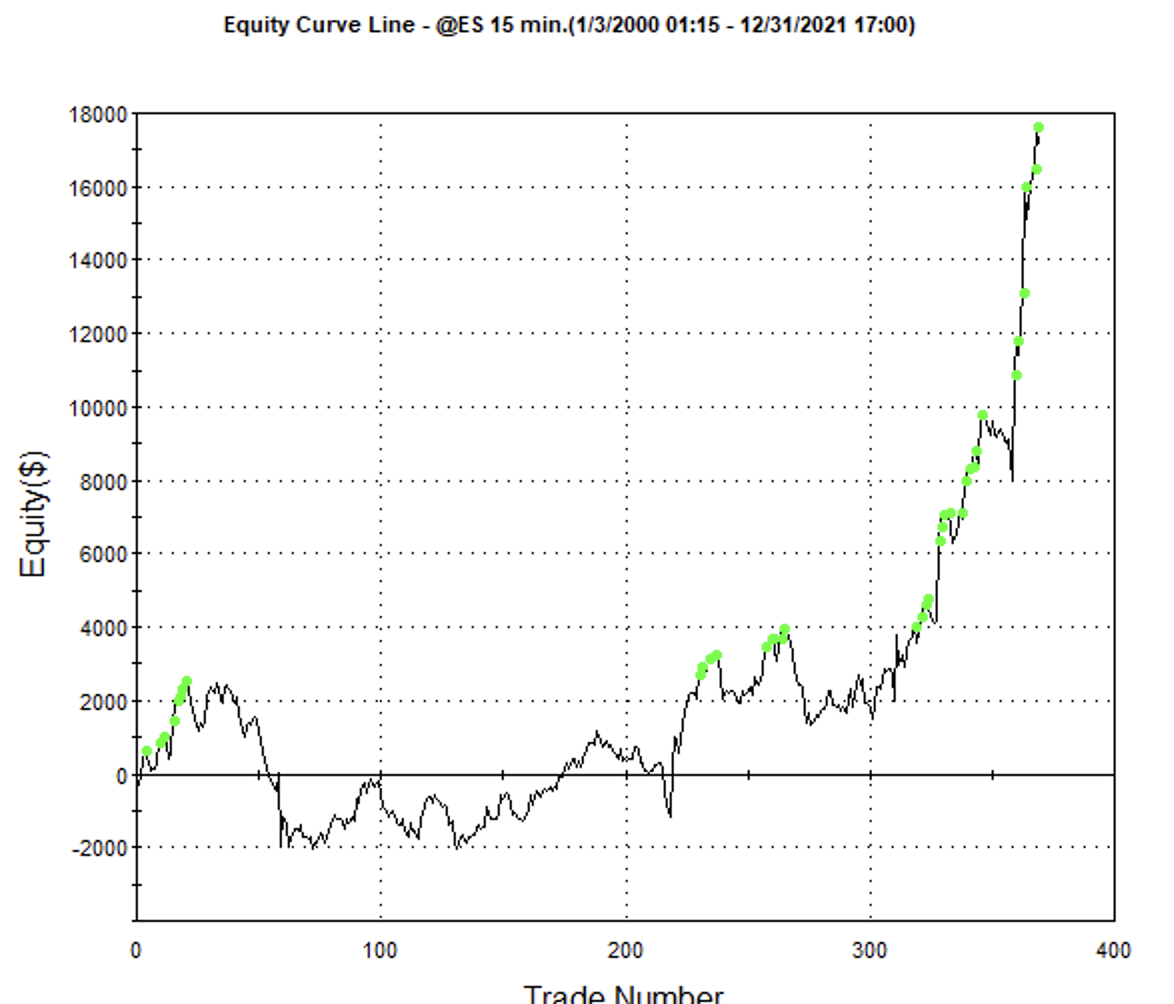 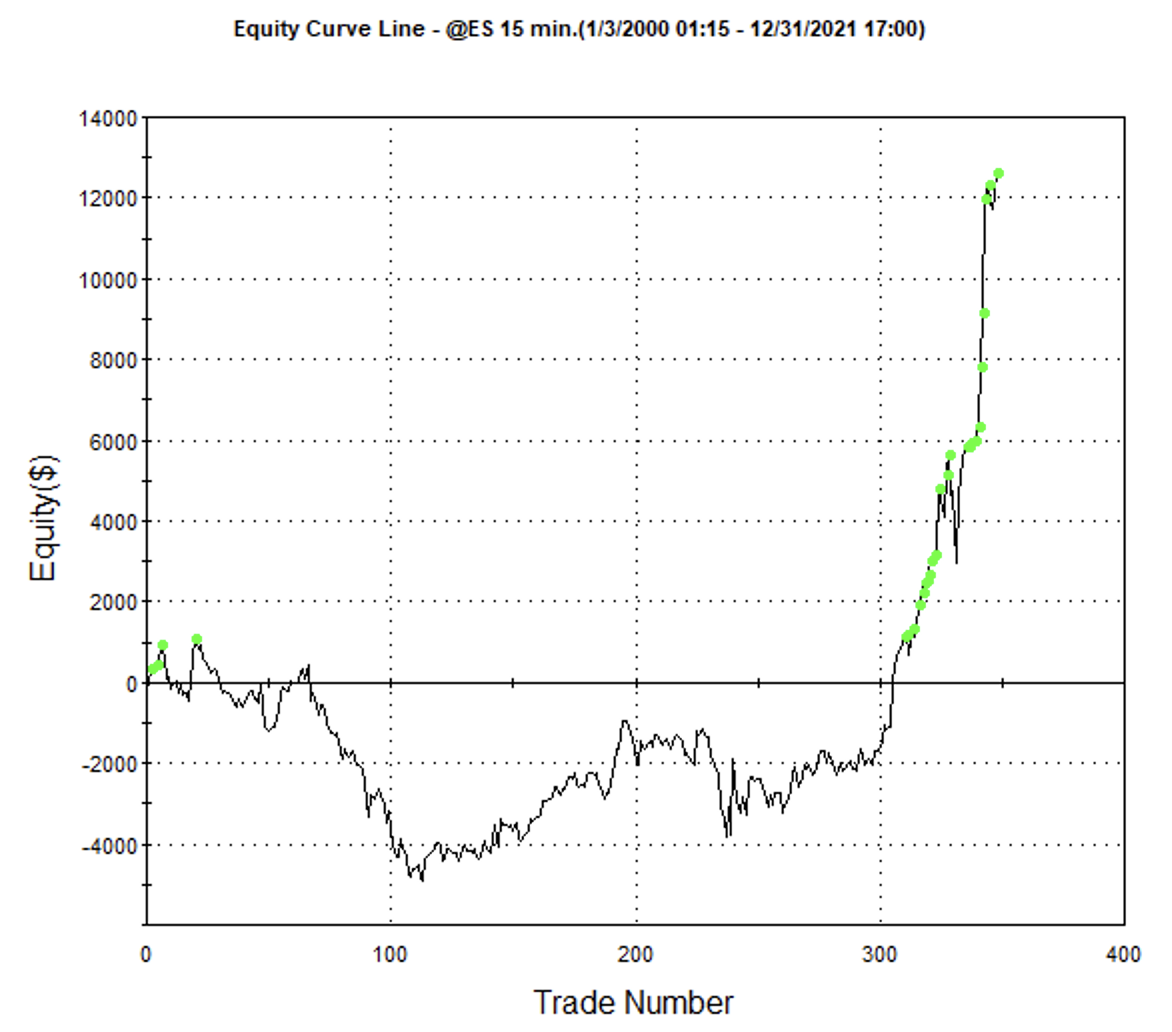 Notice that the primary strength of the equity curve has occurred over the most recent data. This may demonstrate that these edges are new phenomena and will likely fade at some point in the future.

It's likely these types of edges change over the years. Thus, it may be essential to perform these studies a couple of times per year. It might even be worth using less historical data to focus on what's happening now—may be looking at the last two years of trades, for example. In short, you have to be more adaptable if you want to trade intraday.

What I did in this article is a relatively simple study, but such studies can often point you in the right direction when gathering ideas on trading systems. In short, we are asking, where might be the low-hanging fruit?

Again, we performed a market study BEFORE building a trading system. We discovered that mean reversion seems to be a better choice. Think of how much time this might save you by not attempting to build a trend-following system! And that's the point. We use our EasyLanguage skills to explore the market characteristic and then try to create a trading strategy to fit those characteristics. Other traders attempt to force a trading style upon the market, often leading to wasted time and frustration.

This type of study can also be applied to any other instrument or timeframe. Likewise, we only explored long trades during this study, and adding a shorting study would also help build a complete picture.

Other ideas could include using different indicators for our trend following and mean reversion trading systems. Likewise, it would also be essential to vary the look-back period for our indicators. By testing a range of values, say between 6-14, we can demonstrate the robustness of the look-back period.

Hope you found this helpful.