The Laguerre RSI vs Classic RSI 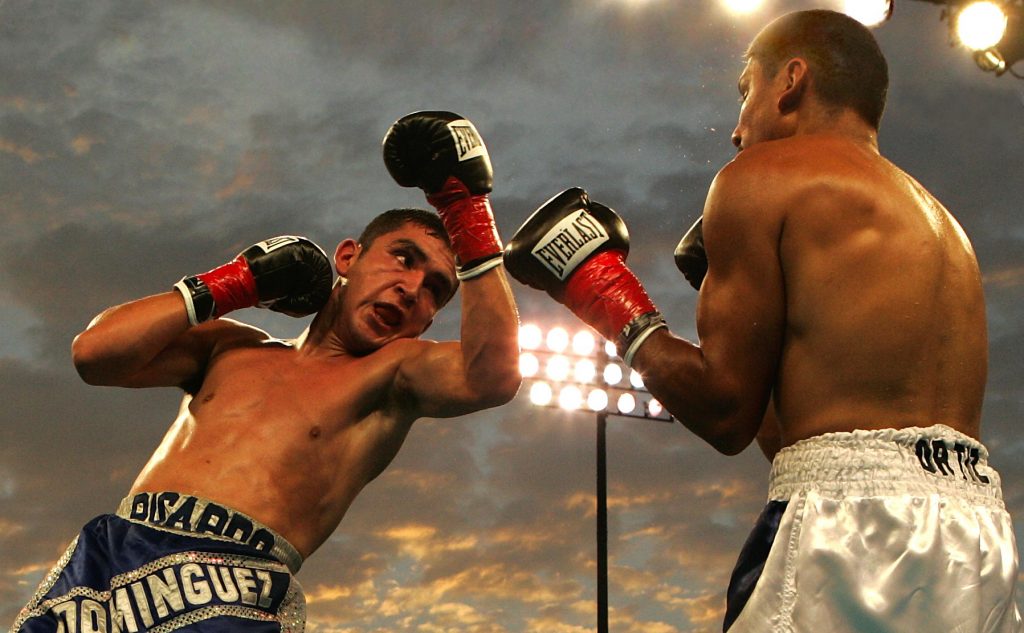 John Ehlers is a name you’ll run across when you start your journey into testing various indicators and filters to be used in your trading models. I remember reading about the Laguerre Filter and Laguerre RSI many years ago when they first appeared on the scene. At the time I was not nearly into quantitative trading as I am today. So let’s take a closer look at the Laguerre RSI and answer a simple question:

Can the Laguerre RSI perform better than our standard 2-period RSI?

Laguerre RSI (LRSI) was authored by John Ehlers. You can read about the Laguerre filter in his article, “Time Warp – Without Space Travel“. At the heart of the LRSI indicator is the Laguerre Transform. The mathematics and explication of the Laguerre filter is well beyond the scope of this article or my understanding. In short, John Ehlers appears to use this technique to “warp” the time coefficients of a traditional EMA filter which results in a quicker response.

Below is the EasyLanguage code for a 4-element Laguerre filter.

The standard Relative Strength Index (RSI) was authored by Wells Wilder. The LRSI uses the current price, a user defined gamma factor, and plenty of feedback to calculate its final value. Below is the EasyLanguage code:

The LRSI behaves in a similar manner to the classic RSI. In the past I’ve tested the 2-period RSI indicator within several mean reverting trading models that trade the U.S. index futures. Several profitable trading models can be built with this indicator that produce surprising solid results for nearly 20 years. The basic rules for the 2-period RSI is to buy when the RSI value falls below a threshold, such as 10. Then sell the position when the price rises above a threshold, such as 90.

Below is a chart of the 2-period RSI trading model applied to the daily chart of the eMin. The bottom pane contains the RSI signal. You can see when this value falls, we enter a new position and hold until the RSI value rises above 90. 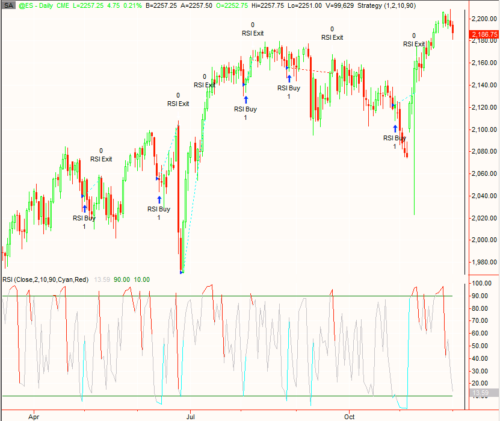 The LRSI would be traded in a similar fashion. Buying when the value falls below a critical threshold, and closing the trade when it rises above a threshold. Below is an image of the LRSI and RSI being applied to a daily chart of the S&P futures. 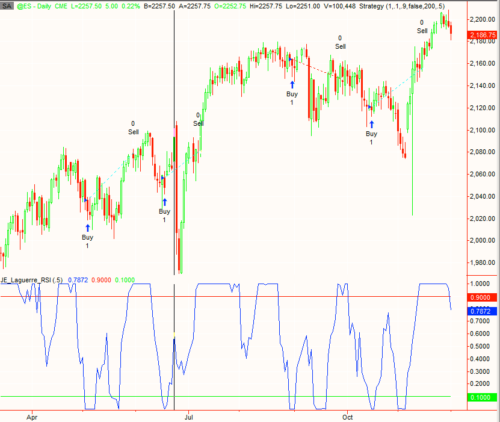 You can see when both indicators fall, they create setups for opening trades. I’m now going to compare our old friend, with Ehler’s much more complex LRSI.

Before getting into the details of the results, let me say this: Unless otherwise stated, all the tests within this article are going to use the following assumptions:

Our baseline will be the 2-period RSI. This trading model will enter a trade when the RSI value falls below 10 and exists when price rises above 90. Below are the results:

RSI vs LRSI On S&P

Now let’s test the LRSI over the same market. The LRSI will enter a trade when the value falls below .10 and closed when the value rises above .90. The results are in the table below.

In this test we can see the baseline and LRSI perform very similar. We end up with about the same net profit and very similar annual returns. The LRSI trading model produces fewer trades and each trade produces nearly $110 more net profit. The maximum intraday drawdown for the LRSI is higher. So if you can endure more drawdown, you can trade a model which makes similar amount of profit on fewer trades.

But this is just looking at a single stock index market. Let’s look at some others.

Below is the results of testing RSI vs LRSI on the DOW (YM).

Looking at the results for trading the DOW we see similar results as when trading the S&P. That is, we see RSI and LRSI make about the same amount of net profit. LRSI does this on fewer trades but it also has more drawdown. In this particular case, LRSI is probably producing slightly better results than RSI. Next is NASDAQ (NQ).

Looking at the results for NASDAQ we can see LRSI actually performs significantly better. More than three times as much profit on fewer trades. Nice! Next up, let’s take a look at midcap stocks by using the S&P Midcap 400 contract.

Once again we see very similar results between the two markets. Finally, let’s take a look at the Russell 2000 (TF).

In this case we see significant improvement in trading the RSI model on the Russell 2000.

Using TradeStations Portfolio Maestro feature, I’m going to combine all our trading symbols from this test into a basket. We can then apply our trading models to this entire basket. This will allow me to generate a summary of our two trading models over all the markets we looked at. The following table contains the results of trading a $100,000 account across all symbols (ES, YM, NQ, EMD, TF) including deducting $30 from each trade for slippage and commissions. Only one contract was traded per signal.

It’s interesting to note how close net profit and annual rate of return is between the RSI and LRSI trading models. In this respect the trading models are nearly identical. What’s different is the number of trades and drawdown. So which one is better? It comes down to what you prefer with regards to drawdown and number of trades. It looks like they both end up at the same location but take slightly different roads to get there.